A Kiss For The Petals - Maidens of Michael

A Kiss For The Petals - Lily Platinum

According to the currently available story information, the visual novel starts some time before Christmas. Risa Azumi, renowned class representative of the first-year "Snow" class, quarrels frequently with the local prodigy, Miya Ayase. They become the center of attention after they are elected as St. Michael's Best Couple by their classmates, despite their outward antagonism toward each other. Not wanting to betray their classmates' expectations, they agree to feign romance. Due to this designation, they are made to organize school events with the four most famous couples in the school: Nanami Oda and Yūna Matsubara, Kaede Kitajima and Sara Kitajima, Mai Sawaguchi and Reo Kawamura, and Shizuku Kirishima and Eris Shitogi.

Takako Suminoe and Runa Hōraisen are also stated to be featured in Maidens of Michael, but their roles are currently unknown. Rena Hōraisen has returned to St. Michael's as a teacher for the first-year class, but the circumstances of her return are also unknown.

Today at Saint Michael’s School for Girls, the class representative for the first-year “Snow” Class, Azumi Risa, had once again been fighting with the class troublemaker, Ayase Miya.

Risa, who is earnest and hard-nosed, and Miya, who hates to cooperate with others, couldn’t have been less right for each other, as they were always on the verge of tearing each other’s throats out.

At the time, the whole school was in a festive mood with Christmas just around the corner.

As couples and spur-of-the-moment couples alike were flirtatiously carrying on, the whole school was abuzz with excitement over the “St. Michael’s Best Couple” poll being conducted by the student volunteers.

Risa, who was single, figured it didn’t concern her…

So then how did she and Miya end up being chosen?!

Although Risa naturally denied that they shared that kind of relationship, the classmates who had selected them would just smile with the reasoning of tempered young ladies who had been raised in respectable families and say, “You always look like you’re having so much fun.”

Resigning themselves, the two decided to go along with it, “Just for appearance’s sake,” and it seemed they would have to stick it out through the coming holidays of Christmas and Valentine’s Day along with four other couples as the committee members for various events.

Those other four couples were practically the student council:

The president of the Environmental Protection Committee, Matsubara Yuuna, and her junior, Oda Nanami.

The singing sensation of the cultural festival, Kawamura Reo, and her girlfriend, Sawaguchi Mai.

And last, but not least, the girls of the Lily Platinum fan club, exchange student Shitogi Eris, and the school’s foremost scribe, the highly respected Kirishima Shizuku.

In other words, only the most preeminent couples on campus.

Will the big name couples be able to handle the events that follow? And will Risa be able to survive the lovers’ holidays of Christmas and Valentine’s with Miya?[1]

Maidens of Michael introduces the new couple of Risa Azumi and Miya Ayase. They are the first couple to be introduced after Shizuku Kirishima and Eris Shitogi in 2010's A Kiss For The Petals - Dyed with an Angel's Petals. Rena Hōraisen also makes her on-screen debut after being limited to indirect references by other characters since Sweet Enchanting Kisses.

All couples from Fuguriya's prior A Kiss For The Petals releases are also featured and have their own storylines that are tangential to the main story featuring Risa and Miya. Yurin Yurin's website for Maidens of Michael featured a character relations chart featuring all thirteen characters and their connections to one another. Some of the connections in the chart contradict information in the Fuguriya visual novels:

The character art is produced by Peko, who created the artwork for all previous Fuguriya titles. Maidens of Michael utilizes a distinct art style from the Fuguriya products, creating a unified, light novel-style look. All previous characters have been redesigned from head to toe for this commercial release. Additionally, the characters have been given new casual winter outfits. Single character frames have been rendered such that they occupy a single 1:3 frame. As a result, characters with wide-volume hair have had their hair compressed horizontally.

Maidens of Michael was originally scheduled for release on 26 October 2012, but was delayed to 30 November 2012 in a news announcement published on 19 October 2012. The announcement also noted that Nanami's voice actress was changed from Haruna Yumi to Takanashi Konoko. On 23 October 2012, was published the promotional video on YouTube.

On 22 February 2018 was announced released by MangaGamer in Steam but was soon removed.[2] 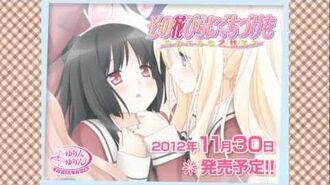 Retrieved from "https://hanabira.fandom.com/wiki/A_Kiss_For_The_Petals_-_Maidens_of_Michael?oldid=11247"
Community content is available under CC-BY-SA unless otherwise noted.